by Matt Hagny, freelance agronomic consultant for no-till since ’94; founder & president of Exapta Solutions since ’99.

I sometimes am called upon to do the impossible: Make a poorly designed planter or drill work well in no-till. And I then have to convey that it really needs to be traded off on something better suited to the task – not what the farmer wants to hear (and I hate making this pronouncement).

The nub of the problem is that the furrow sidewall is what guides the seed into position, so if this sidewall blows apart prematurely (ie., before the seed comes to rest), the placement will be compromised – depth will be less consistent, there will be more dust and duff under the seed, and the seeds will not be exactly in a perfect line where they can all be engaged by the firming device (Keeton or seed-lock wheel – all no-tillers need this firming at the seed’s location, it’s just how much of a compromise you’re willing to accept by not having it). There’s also the issue of creating cracks off to the side of the furrow into which the seed can bounce – this happens in high-clay soils that are damp because the entire sidewall lifts as a chunk, creating a void underneath it (and seedlings emerge late or not at all from seeds over in these voids). About the only thing good that can be said about allowing the sidewall to lift (follow the blades upward) is that it makes the furrow easier to close – but having all the seeds at the proper location is usually far more important than furrow closure (which is usually not too difficult with a well-designed spoked closing wheel anyway).

Think that a seed boot or shoe takes care of this concern about sidewall blowout? Think again – this is why double-disc planters always have had (and always will have) more precise seed placement than a single-disc opener (no matter how well it’s designed). The single-disc opener is just too reliant on the integrity (soil structure plus any smearing) of the sidewall to keep it out of the way, whereas a double-disc opener takes no chances – it’s pushing outward in both directions simultaneously. 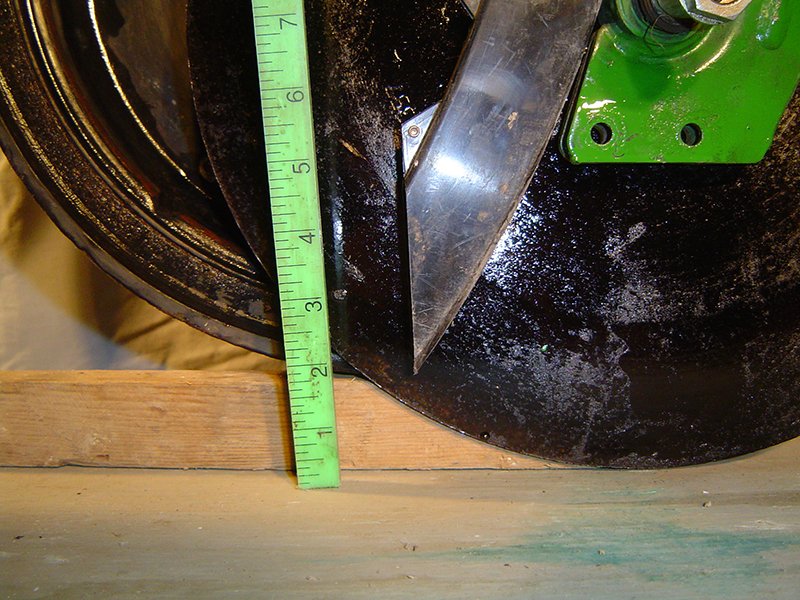 Even the double-disc openers have issues if the seed tube doesn’t drop the seed way far forward between the blades (this is one reason the BrushBelt and SpeedTube have advantages for actual placement, not just spacing; and also why the ‘straight’ seed tubes work well on other JD planters for the very few of you who know what these are; and also why tilting the planter unit a few degrees nose-up vs nose-down improves the seed placement so much). A boot or a shoe simply cannot go all the way down to the bottom of the furrow because it would plug, but another opener blade can.

So, it comes down to needing the gauge wheel up against the blade with its weight carried on the soil at the precise spot where the blade is exiting the soil (for this reason, RID gauge tires that are indented next to the blade usually cause far more problems than they solve). For planters, the gauge wheel positions are thus:

MEDIOCRE/GOOD: AGCO/White (these are a smidge forward vs Deere, and also tilted out at the top, so not quite as good for controlling sidewall lift; and they might’ve gotten worse on the 9000-series since the blades are now an inch bigger diameter)

POOR: Monosem, CIH, Horsch Maestro, Vaderstad Tempo (these are all much too far forward; indeed CIH continues to get worse as they keep going to larger and larger blades without lengthening the gauge wheel arm — and their seed drop is so far rearward as to exaggerate the problem).

Now for some of these last ones listed, an enterprising person could cast & machine different gauge wheel arms to move the wheels rearward a couple inches to be in the correct spot; however, it’s not possible for CIH because the covering discs are in the way. 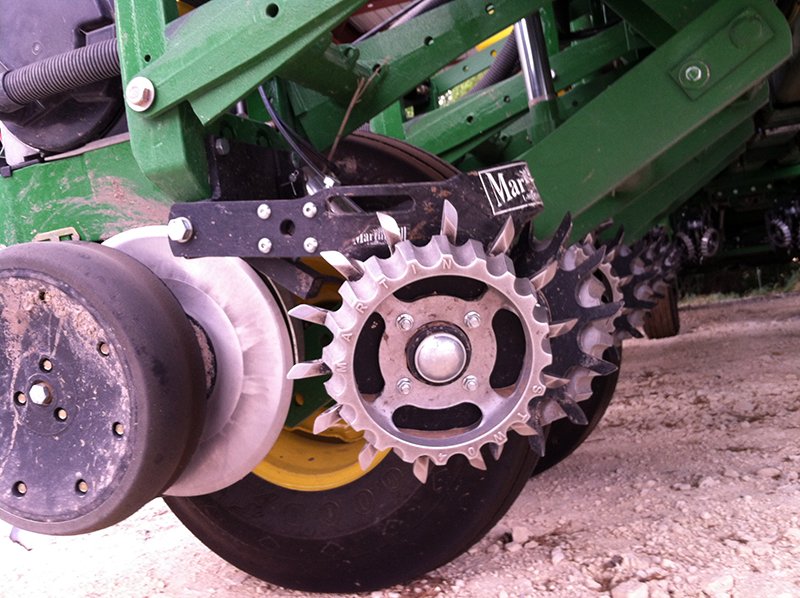 Note how much of the opener blade is visible ahead of the gauge wheel. All JD row units from the 7000s to the MaxEmerge 5 have this gauge wheel position (perfect location). All Kinzes also have this location, as does Harvest International’s Laser Pro. 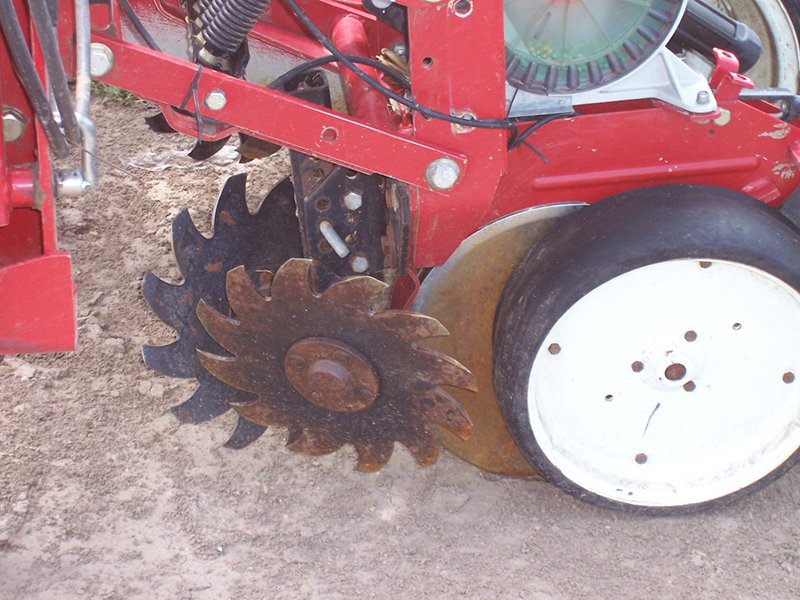 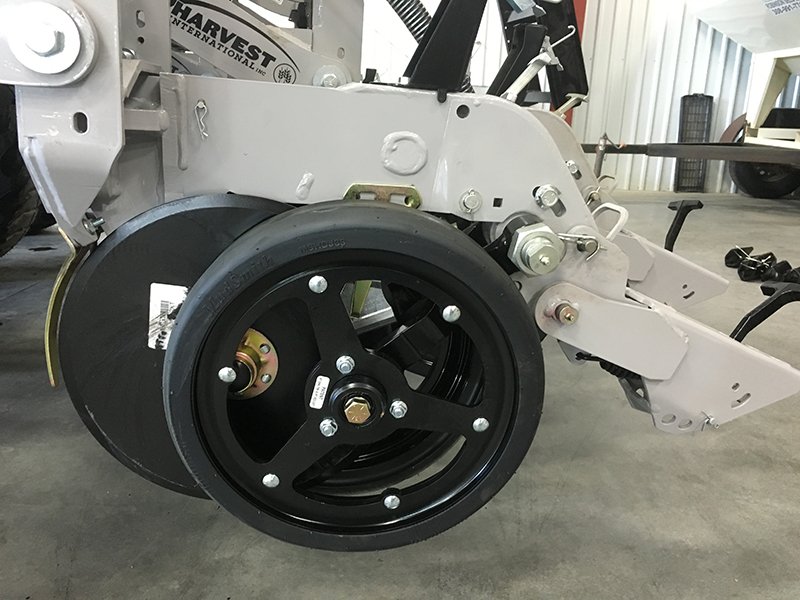 Harvest International’s LaserPro 1 has the same gauge wheel location that Deere and Kinzes have. Perfect.

I do realize there are plenty of other considerations when choosing a planter make/model, but if you’re serious about getting more uniform emergence and higher yields in no-till, you’d be wise to choose from the ones that have the best gauge wheel locations. Furthermore, there’s less soil disturbance when the gauge wheel is in the correct spot. 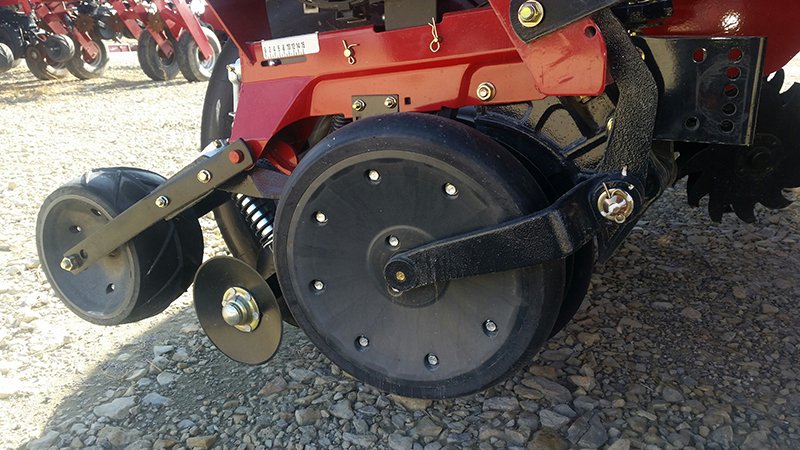 Gauge wheel is extremely far forward on the Case-IH Early Riser opener, which results in a tremendous amount of sidewall blowout, poor seed placement, and way too much soil disturbance. And it gets worse every time CIH goes to a larger blade size (now at 16-inch) without making the gauge wheel arm longer. 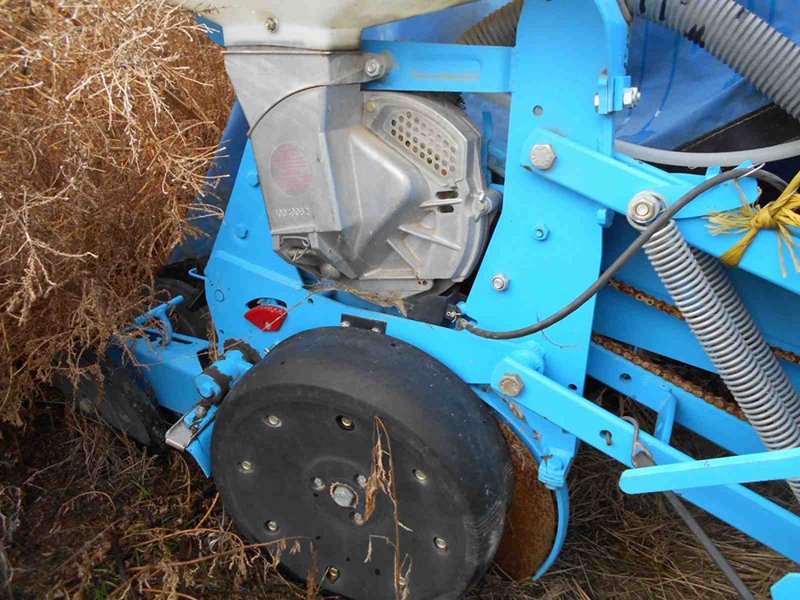 Although not as extreme as the Case-IH and Horsch, the gauge wheel on Monosem’s NG+ series is much farther forward than AGCO/White. The Monosem has big problems with seed placement in long-term no-till because of this.

MEDIOCRE: Morris Razr (it’s a true gauge wheel, but a bit too far forward; also 20” blades are undesirable, and the walking beam between the packer wheel [or the firming + closing beam, depending on option chosen] and the opener hub is probably more detrimental than beneficial; they’re so enamored with walking beams that there’s another between the firming & closing wheels)

POOR: Tobin Tornado of Australia (gauge wheel too far rearward; also, numerous other major flaws such as lack of a seed-lock wheel, a 24-inch blade that will hairpin horribly, seed boot too far rearward, too much soil disturbance because gauge wheel is too far rearward and it’s not flush against the blade – there’s a gap) 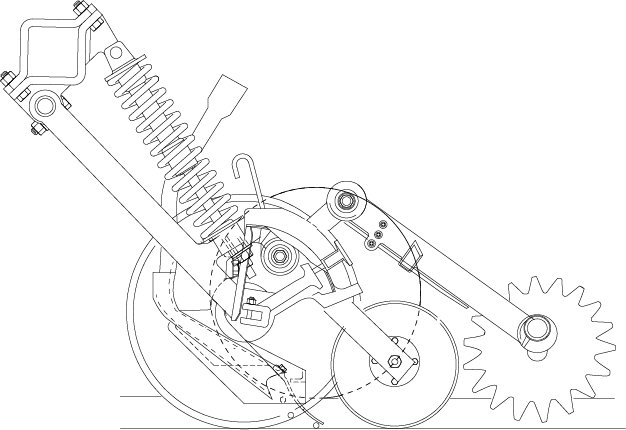 Diagram of JD 60/90- series drill opener, showing the gauge wheel at exactly the right spot to hold down the soil as the blade is exiting the soil. JD 750s & 1850s had the same gauge wheel positioning. Note the location of the bottom edge of the boot – it normally just skims the soil surface; you can’t run it much below the soil line because it hangs out beyond the cut made by the blade. So it’s only the integrity of the sidewall guiding the seed into position.

That’s about it for true gauge-wheel drills, sadly (the old Flexicoil FSO had the gauge wheel in the proper spot, but had massive upkeep problems). A few openers have wiper wheels alongside the blade (the original Barton) and these merely controlled some of the sidewall blowout rather than gauging depth, or wheels that share the depth gauging with the packer wheel via a walking beam (Bourgault 3710, 3720). Of course, there are numerous clones of the JD 50/60/90 by Argentine, Brazilian, and Russian companies.

I’m sure everyone is thoroughly sick and tired of hearing us promote the JD 50/60/90s as being the best choice for no-till across a huge range of environments on multiple continents. We’re tired of having to say it (and tired of contributing to Deere’s hegemony in USA). I really wish something better would come along! (And I’ve been saying this for decades – as to wanting a better opener….yet all of the new models still have worse flaws than the JD 50/60/90s.)

Just some things to keep in mind the next time you’re trading planters or drills. Gauge wheels being in the proper location should be one of the ‘must have’ criteria. For more considerations on opener design, see our newsletter.