Vigorous Seedlings Depend On You

Crown (nodal) roots develop above the seed in grass crops such as corn and wheat, and must grow through the furrow sidewall to establish. These nodal roots are critical to crop growth and yield. This is a photo of a young corn plant, showing typical development of nodal roots that have met minimal restrictions during their growth. Eventually about five more sets of nodal roots develop in a series slightly above this first set.

The nodal root system goes on to become the major supplier (by far) of water and nutrients to the corn plant (or other grass crop). The dotted line shows the location of the soil surface and the original seed furrow created by the planter’s double-disc openers. The mere act of prying open this furrow in a moist soil will create compaction and smearing of the sidewall, which if left intact will impede root development—when encountering this sudden density change, the elongating tips of the nodal roots will take the less restrictive path of growing lengthwise along the furrow. This will ultimately decrease the total volume of soil explored by the roots. If clayey soils are planted wet and then followed by dry weather, the sidewalls bake into impenetrable bricks and the nodal root system will be seriously deformed and stunted. For these reasons, it is highly important to break apart the sidewall with a spoked closing wheel configuration, ideally one that 1) consistently fills the furrow with a uniform depth and density of soil, 2) does not further compress the sidewalls, and 3) does not disturb seed placement. Note that some closing wheel configurations also do the seed-to-soil contact, while others rely on a separate mechanism to perform that function (such as a Keeton or ‘seed-lock’ wheel).

Nodal root development is critical in winter wheat, also. Following a tough winter, it’s not uncommon to see quite a bit of variability in the condition of the winter wheat going into its spring growth: ranging from excellent condition to completely dead, sometimes all in the same field. Some of the variation in winter injury or winterkill is due to: 1) how well-insulated the growing point (crown) of the plant is; and, 2) how well-anchored the seedling is. Any plants that set their growing point too shallow are prone to injury or death due to temperature fluctuations (if there isn’t a continuous snow cover during the winter). The growing point will be set near or at the surface if the seed isn’t placed deep enough, which we often see in slight depressions in the field, where the drill openers run out of down-pressure, or in areas where the opener has to cut large amount of residue before penetrating the soil. Sometimes the seed is in the soil, but the growing point is set in the duff or straw layer above, which does not allow proper crown root development. Also vulnerable are any areas where the furrow is left open or partially open. These are but a few examples of the critical importance of the seeding tool—not only for adequately covering the seed with protective soil, but also for breaking the sidewall to allow unrestricted root growth. (If winter wheat seeding is rather late or winter sets in early, sometimes the shallowest placed seeds do the best if they happen to be at a more advanced growth stage and have their nodal roots set.  Don’t assume that deep placement is the key to winter wheat survival.)

Other grass crops such as spring wheat, barley, and milo (grain sorghum) differ slightly in where the nodal roots initiate, but otherwise are quite similar in needing to grow the majority of their roots through the furrow sidewall. Building a strong plant begins with the right seeding tool and methods.

In dicots (broadleaves), the radicle (first root to emerge from the seed) becomes the taproot—and this is of great importance to those plants, and must grow downward, not sideways, for the plant to have maximum vigor as well as sturdiness against mechanical forces such as wind. The taproot needs to grow downward in a reasonably straight path since it is the origin of all the lateral roots growing out from it. Taproots may reach very deeply into the soil in some species, such as sunflower, alfalfa, and oak trees. So, from a seed placement standpoint, it is especially important that seeds of broadleaf crops not be lying loose with a smeared layer under them. Roots follow the path of least resistance, and the radicle gets ‘confused’ if it emerges from the seed in low-density soil and then suddenly encounters high-density soil in its attempt to go downward. This is why dicot seeds in particular need to be embedded in the bottom of the furrow, usually best accomplished with narrow, in-furrow seed-lock wheels, or sliding firmers (Keetons are an example) with adequate pressure on them. 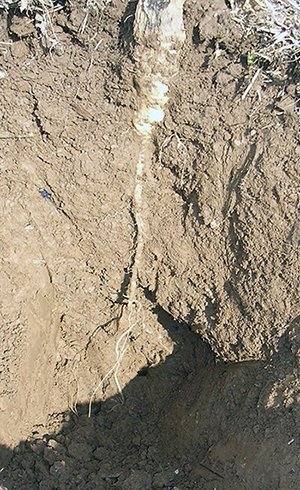