The Fundamentals of Seed Placement

This photo shows perfect seed placement in a no-till (zero-till) seedbed. Loose material over the seed is easily brushed away to reveal the seed ‘locked into’ the bottom of the ‘v’—it is tucked in tightly & would need to be pried loose (and you might have trouble finding it!). The upper portion of the sidewalls created by the opener blades has been completely broken up by the closing system, but the very bottom of the ‘v’ is undisturbed. If you excavate several rows and find that all the seeds are being placed like this, you can be assured that you are doing a good job (although it would be wise to periodically check at various locations)—if not all the seeds are being placed properly, it is time to do trouble-shooting. (Note that in very wet high-clay soils, the sidewall will not crumble this completely, but will still be disrupted.) 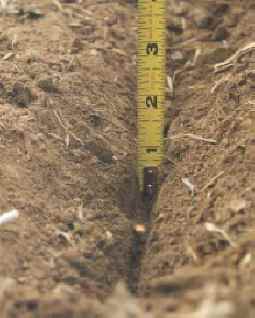 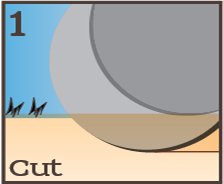 Cut residue and soil to create the furrow of the proper depth.

Place the seeds consistently into the bottom of the furrow. 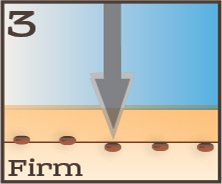 Firm the seeds by applying the right amount of pressure exactly where it is needed. 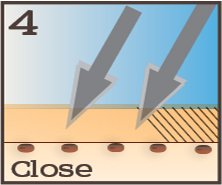 Close the furrow by chopping the sidewall, to prevent drying and allow good root exploration.

The germinating seed and seedling first encounters an environment created by your seeding equipment. In addition to controlling depth and spacing, your seeding equipment and attachments affect the uniformity of seed-to-soil contact and the amount and condition of the soil placed over the seed. This environment determines the rate of air and water exchange during germination and early growth, as well as the resistance the seedling encounters during emergence and root system development.

Proper agronomic placement of all the seeds is extremely important for optimum emergence, early growth, and eventual yield. The following characteristics are desired for every seed planted: (1) the seed is embedded into the moist furrow bottom at a consistent depth; (2) the furrow sidewall is shattered to cover the seed uniformly with loose fractured soil. When the seed is securely firmed into the surrounding soil, it will draw moisture easily for germination. The seed ‘passively’ absorbs moisture until the radicle (first root) emerges from the seed, which must quickly grow into the soil below the seed for the process to continue. Moisture loss to the atmosphere will be controlled by the mulch in the field, and the soil over the seed. Loose soil slows the rate of drying better than packed soil (for the science behind this, see our library article, Proper Seedbed Preparation.)

While everyone is hung-up about having perfect ‘picket-fence’ plant spacing, it is really not all that important in terms of yield. Of much greater importance for corn yield (or cotton or sunflowers) is uniform timing of emergence, which is largely a result of uniform placement of seeds in the soil—uniform depth, uniform amount of seed-to-soil contact, uniform fill over the seed, etc. There’s been a lot of research done comparing spacing vs emergence timing for yield effect, and much of that research is compiled here. Some of those researchers have commented on the summation of that evidence more recently:

Emerson Nafziger, Univ. Illinois Extension, states: “Within reason, plant spacing uniformity within the row has little effect on yield if plant population is adequate for high yields. While plant spacing uniformity generally has little effect on yield, the same cannot be said about plant size uniformity . . . . When a plant emerges more than a few days later than its neighbors, or is injured while its neighbors are not, chances are that it will never regain its competitiveness with its neighbors, and as a result it will usually yield less than other plants. . . .[T]he plants next to a late-emerging or injured plant . . . do not make enough extra yield to make up for the loss of yield by the plant that falls behind.” [Emphasis added] (Chapter 2, Illinois Agronomy Handbook, p 22)

In April 2009, Nafziger also wrote an article summarizing the research: “Uniformity of plant spacing in the row takes on less meaning as populations increase, and it is nearly meaningless at plant populations in common use today [in the Corn Belt & under irrigation] with average plant spacing often about 6 inches or even less.” (in Univ. Illinois’ The Bulletin newsletter, ‘Are Your Corn Stands “Precise” Enough?’)

Christopher Boomsma & Tony Vyn, Purdue, have conducted some highly interesting research on plant-to-plant uniformity being more of a challenge in no-till, at least with the planter setup they were running. Plant-to-Plant Uniformity is Essential for Optimum Yield in No-Till Continuous Corn

“Options For No-Till: If [standard] V closing wheels are used in wet soils, you can get severe compaction on both sides and prevent the roots from growing out of the seed trench. If pressure is reduced to prevent compaction, you will not close the seed trench…Failing to press the seed and cover with loose material can lead to total stand failure. At best, it slows early growth and causes the plant to position its growing point improperly. No-tillers must add some type of seed lock mechanism (Keeton seed firmer or a seed lock wheel) to press the seed into the firm and moist soil at the bottom of the trench. Then some type of positive action must be used to cover the seed with loose soil and counteract the compaction and smearing that may have been done with the seed opener. A spoked wheel can chop up the edge of the seed trench and place some loose material over the top of the seed. This loose material keeps the seed zone from drying, allows oxygen exchange, and encourages warming in the area where the growing point will occur. Positive closing action is needed in wet and high residue situations. This is especially true for some soil types.”
—Dwayne Beck, PhD, manager Dakota Lakes Research Farm, from several sources circa 1995 and compiled by Beck in 2005 for Exapta (he began stressing the need to approach seed pressing and covering differently in no-till systems as early as the 1980s).

Successful no-till seeding begins with spreading the straw and chaff during the previous harvest. Large combines and wide swaths require aggressive technology to move the material out the full width of the swath—for some of the best, see Redekop Mfg. Additionally, there are a great many benefits to going a step further with a stripper head (e.g., Shelbourne; AGCO), which entirely eliminates straw chopping / spreading problems. Plus the long pieces of straw standing upright are leaps and strides easier to seed into with disc openers. 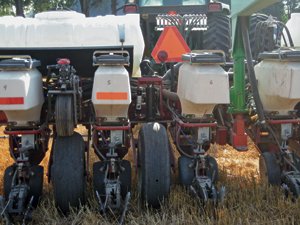