Cross-Slot The Future of No-till? 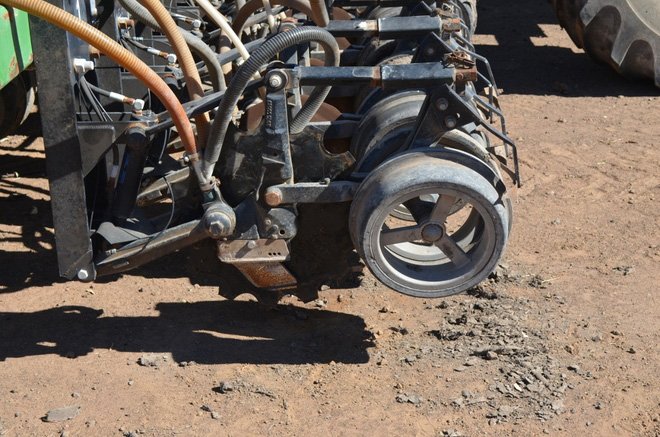 by Matt Hagny, freelance agronomic consultant since ’94
An article this past summer (2017) in Corn & Soybean Digest raises this question, and sets forth the reasons that its inventor, John Baker, claims it is. To a large extent, it regurgitates a propaganda barrage from Baker’s PowerPoint presentation without any skepticism or counterpoint. Many of Baker’s claims are preposterous, and his views warped from reality.
The Cross-Slot was originally designed for pasture renovation in New Zealand. It has the ability to cut very heavy residue without hairpinning. It’s tremendously heavy, and with hydraulic cylinders transferring the frame weight to the opener, it can penetrate extremely hard soil conditions. It can safely place more fertilizer per opener than some other disc-opener designs, by virtue of some separation between the seed in one wing and fertilizer in the other.
What it cannot do is routinely get all the seeds to germinate and emerge at the same time – this isn’t terribly crucial for pasture renovation, but it’s a really big deal for grain crops. The reason the Cross-Slot struggles in this regard is partly because seed-to-soil contact relies on its press/packer wheels (which also gauge depth) squashing all the soil from the surface downward. This results in excessive packing above the seed, and it varies along the length of row due to soil parameters – so some seeds struggle more than others to emerge (and they all struggle more than with other openers that separate depth gauging from seed firming from furrow closing; this delays emergence for the entire crop). Another reason is the shape of the furrow consisting of this ‘inverted T’ such that the seedling must choose between growing directly upward, or following the slit, which is lateral, then up (for example, a demonstration in the ’90s at David Dukes’ farm in Iowa into killed CRP sod was a disaster for corn emergence, with exactly this happening; of course, Baker has all sorts of excuses why this has been solved now, but the fact is that the components of the opener are still in the same place doing the same job – and these are fundamentally flawed, very flawed). (This is what happens when engineers don’t talk to agronomists when designing seeding equipment.)
In somewhat dry conditions, the lack of seed firming at the seed’s location is highly detrimental. And because of the wing’s smearing of the soil below the seed, this effect is worsened.
Another big downfall of the Cross-Slot is its inability to run in moist to muddy soils. It simply clogs up.
This isn’t just theory: I know of several Australian farmers who simply couldn’t get the stands with their Cross-Slots, despite years of trying, and finally gave up and moved on to the JD 1890s – and are now ecstatic about their stands. These guys will also comment that while that was bad enough, what was costing them even worse was not being able to get their crops seeded on-time due to the Cross-Slot’s complete inability to handle wet soils.
The cost of these machines is 2 – 3x the price of most other ‘good’ no-till drills. Replacement of the wings is very frequent, usually at least once mid-season, often several times, which is laborious and expensive (Aussie comment: “Repairs on the Cross-Slot were sending us broke”). These machines are also tremendously horse-power hungry because you’re dragging all those wings thru the soil, as well as the machine being enormously heavy.
If you want independent opinions on the Cross-Slot, you may want to contact Dr. Dwayne Beck (South Dakota State University: Dakota Lakes Research Farm) and/or Paul Jasa (University of Nebraska-Lincoln). They have been around this machine since the ’90s and have extensive knowledge of no-till opener design, and are usually willing to candidly share their opinions. (Their views on the performance and cost of the Cross-Slot are mostly the same as mine.)
The Cross-Slot has been around for 25+ yrs, and were it not for intense marketing efforts, it would’ve gone away by now – the patents are off, and nobody is copying it. The resale is very poor – some used machines are on the market for many years before being sold. Oh, sure, you can find a few Cross-Slot owners who are pleased with them, but they just can’t bring themselves to terms with the fact that they wasted so much money to obtain mediocre results.
Hardly the future of no-till, or “saving” it, the Cross-Slot is more like a bad dream that just won’t go away. We definitely need better seeding equipment for no-till, but it’s going to take some creativity and not flogging the same old design that has such major limitations. Moving on!