Whether you are a seasoned no-tiller or a beginner, you’ve probably come to no-till for improved profit potential, more efficient use of labor and capital, dramatic reductions in soil erosion, and preserving the environment. If you’re new to the concept, no-till (a.k.a. zero-till) is best defined as a continuous and permanent system of crop production whereby each new crop is seeded directly into the previous crop’s stubble (also known as stover) without any soil tillage or inversion. It’s a bit more than just growing crops in the absence of tillage, since crop rotation and cultural practices must now suppress or avoid some of the weeds and pests, and because equipment and techniques will change. To learn more about the science and practice of no-till farming, visit these websites (see links) or browse our online library below.

The Biology of Soil Compaction
It will change the way you think about soil compaction. Consider it required reading for anyone in farming. Or gardening!”

Emergence Uniformity Studies
Emergence uniformity and spacing uniformity studies conducted by Paul Jasa, Extension Engineer with U.Neb.-Lincoln, at Rogers Memorial Farm near Lincoln, NE.
Site #1 was upland on a silty clay loam, while #2 was bottomland silt loam. All trials were no-till into soybean stubble, with ~ 20 years of continuous, low-disturbance no-till history. Each year, Site #1 was planted by hand, while Site #2 was planted with a planter and the extra seeds slipped in by hand (and/or plants removed by hand). Three replications were used in ‘07 for each treatment, and 4 replications for 2008 – 2010. A population of 27,000 was used in ‘07 on upland (Site #1), but was increased to 30,000 thereafter.

Proper Seedbed Preparation
by Lyle Carter USDA-ARS Ag Engineer
“The soil to seed contact should be controlled with a seed firming device such as a seed firming wheel rather than by firming the covering soil…If the planter does not disturb the soil below the seed, if the seed is pressed into that soil and if the covering soil has less moisture and lower density or greater pore space, a soil textural discontinuity exists at seed midline or slightly above. This discontinuity retards water loss from below while the loose soil above dries quickly, allowing higher temperatures and increased air permeability.”
—Lyle Carter, ag engineer USDA-ARS, published in 1990

Dwayne Beck on fertilizer placement
“There is little or no evidence that strip till improves yields (as compared to proper no-till with fertilizer placement) sufficiently to overcome the additional costs and risks….In this series of [no-till] experiments, treatments that included both the pop-up and side-band starter blend placement were always in the high yield group. Using just one of the placements (side-band or pop-up) by itself was not as consistent.”

Proper Methods for Evaluating Plant Spacing
by Dwayne Beck
“Several years ago Bob Nielson from Purdue University proposed the idea of using the standard deviation of plant spacing measurements to evaluate planter performance. In a personal discussion, I intimated that it might be OK to use that measurement as long as the users understood the limitations. The point is it should only be used to make comparisons where NEITHER row-spacing or population change. When these factors change the Standard Deviation number could be misleading. Since we are doing some evaluation work on our electric drive and closing system studies it might be the right time to revisit this issue.”

For general information on No-Till, use the links below:

No-Till On The Plains 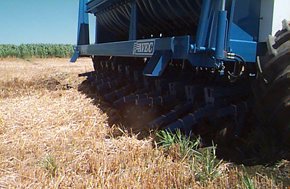 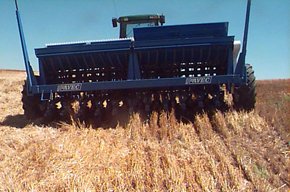 An AVEC drill at Dakota Lakes Research Farm. AVEC drills are not marketed in North America.