Continuing on from our previous email with seed firming and furrow closing steps:

5) Seed firming is mission critical. Unless you’re willing to rely on a rain every time you seed (not wise!), you must achieve good seed-to-soil contact, and this is especially true for crops such as soybeans and peas. The very first JD 750s started out with an extremely wide seed-lock wheel (the vertical wheel that runs in the furrow), and they’ve been making them narrower ever since. The Pro-series seed-lock wheel is now the 4th iteration, and they still leave a lot to be desired—basically it’s a copy of Needham’s rubber-tire V8 (such a close copy the parts are interchangeable), which did a decent job of seed firming but had troubles with longevity as the rubber compound wore quickly, and worse, it often pulled out of the rim. JD’s 3rd generation (90-series after late ’06) seed-lock wheel also had issues with the rubber tire pulling out of the rim. Truly superior results and wear-life come from a urethane (plastic-like compound that in this case is fairly hard but still flexes a bit) ‘tire,’ such as our DuraLok. Not only does the urethane have an insanely long wear life, but it actually sheds mud better than the rubber tires. Plus, in hard, semi-dry conditions, the denser urethane does a better job of embedding the seed into the soil, whereas the softer rubber compounds let the seed indent the rubber rather than the seed indenting the soil. Still not convinced? Try a couple DuraLoks to see for yourself—they’re simply amazing. 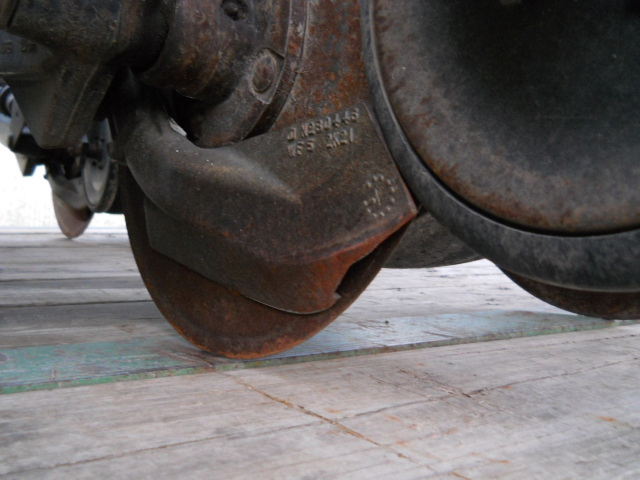 This is the 2d-generation seed-lock wheel from Deere, from approx 1990 – 2006. They were much too wide and were lousy for seed firming in long-term NT soils especially in southerly areas with low OM because they’d ride on the sidewall and sometimes never engage the seed in the narrower furrow bottom. (Note also the seed boot is worn out here.)

The sleek shape of the DuraLok allows it to stay clean when OEM & competitor (aftermarket) firming wheels are clogging with mud, pulling seeds out, and dragging mud against the gauge wheel. Even the SDX firming wheel was having more problems than the DuraLok.

Are we concerned about wiggle of the seed-lock arm at its pivot point? No. Any play here just lets the wheel follow the furrow better. But you do need to keep them moving freely. If you’re tired of greasing them, or tearing them down to clean out packed dirt, have a look at our Aricks bushing kits that eliminate the need for greasing.
6) Now to the final step of closing the furrow: If you’ve done the seed-firming step adequately, you don’t want a lot of packing when closing the furrow—that just slows emergence, and may even prevent it entirely. The smooth cast closing wheels on the 50/60/90-series have a ridiculous tendency to hop if operated more than 5 mph, especially in corn stalks. Of course, they do nothing when airborne, and then they come down like a hammer—which again really hurts emergence. The farmers who bite the bullet and install our Thompson wheels are quite pleased (even ecstatic) about their performance. Of course, there are plenty of other aftermarket spoked closing wheels to choose from, but generally they are less optimal across the array of conditions most no-tillers encounter. Ranging from too heavy and thick, which causes too much packing and too much gathering of mud, to long-skinny spokes that go too deep, usually the results are better than smooth OEM cast, but not as good as our Thompson wheels—indeed, if we ever could find a design better than our Thompson wheels, we’d be selling them!! 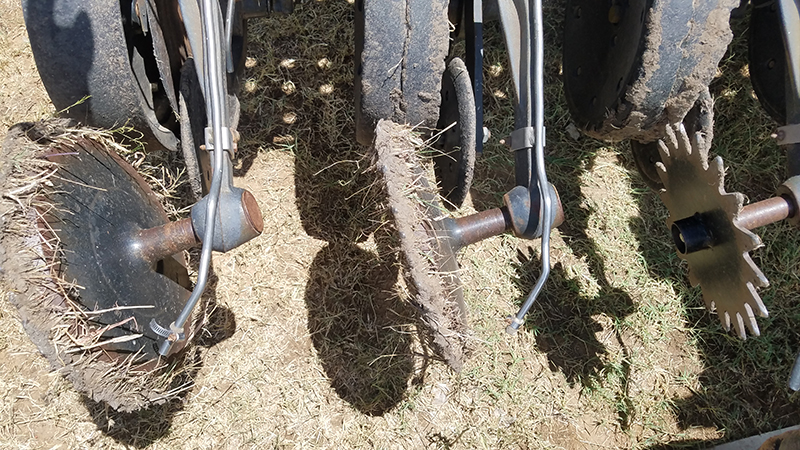 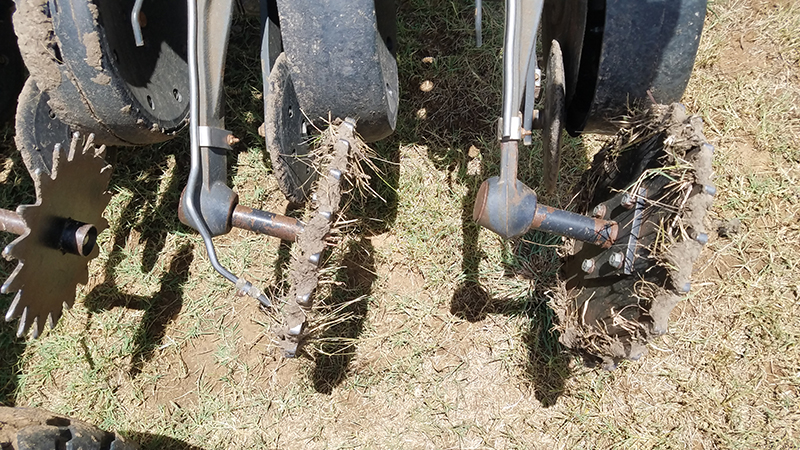 A south Texas customer sent us these, and said there were no problems with the Thompson wheels, while the other two competitors balled up.
As to Deere’s new Pro-series opener, they’re now offering the option of a notched closing wheel—still cast iron, still much too heavy, and too wide. And there aren’t nearly enough spokes on it to do a decent job of closing, and the packing on those few points will be rather severe. Most of the aftermarket closing wheels will be much better than these, and Thompson wheels vastly superior.
Another advantage of Thompson wheels is that their low mass greatly reduces wear on the closing arm’s pivot (certain other aftermarket wheels are also not so overweight, but they’re generally not as good at closing as the T-whls are—not only do our customers say this when they do comparisons, but also our Seeding School stand counts over the years prove this). Excessive wear on the closing arm’s bushings will allow the closing wheel to drift considerably from its optimum position, and it’ll be far less effective at closing the furrow and breaking the sidewall. More than 1/4 – 3/8″ side-play at the closing wheel’s location is a significant problem, so the bushings should be replaced. Exapta offers Aricks bushing kits for this, which have superior seals so you’ll never have to grease these again! The Aricks closing kit uses Teflon bushings for silky-smooth action, with tighter tolerances than competitor kits. Built for severe Aussie conditions, these are worth every penny.
7) While you’re thinking about the next crop you’ll be planting, don’t forget to send seed samples off for Cold Germ and AA for all the seed lots you might be planting. Including wheat. Don’t let poor seed quality be the undoing of all that hard work rebuilding your drill. Read more here
For more info on drill setup and adjustment, see the Tech Tips for Drills webpage, and our DVDs No-till Seeding Explained, and No-till Seeding School (in-person on August 9th, or DVD).