A plastic protrusion off the back of the seed boot–what could be more trivial? Except, they’re not so trivial. These reduce seed bounce, which is especially bad on air drills, but a plenty big problem on box drills too.
Some vendors will confuse the issue and try to assert that their flaps (aka seed tabs) do a significant amount of seed firming, to the point that you don’t need the seed-lock wheel—but don’t believe it! First, the flaps in question barely go down to the bottom of the furrow, and barely apply any pressure. And, even if they did, it would be terribly inconsistent pressure due to changes in the angle of the boot during field operation—these openers aren’t on a parallel link, so the boot tilts as the opener goes slightly up/down across mild undulations. It’s the same reason that a Keeton doesn’t work on these drills—there’s far too often that the boot lifts the Keeton (or seed flap) up off the furrow bottom. Just a little bit of tilt, and no pressure! See diagram. 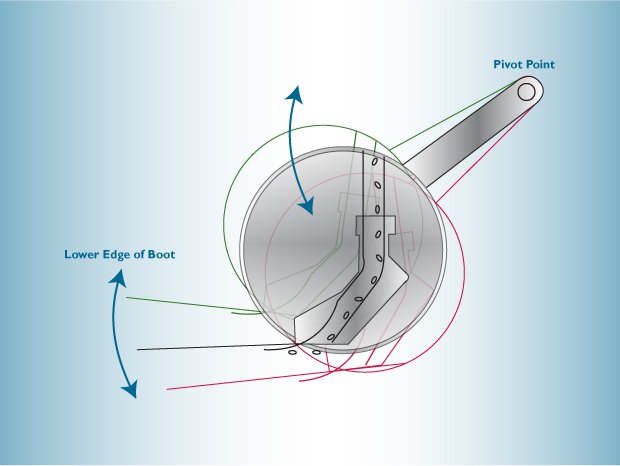 We strongly encourage a good seed-lock firming wheel — one of the proper shape, and preferably flexible. The OEMs since ’05 are much better than the old 1″ wide wheels, but still not as good as some aftermarket wheels (and we were never quite satisfied with those either, so we developed our own, the DuraLok). For sliding firmers, the only acceptable type is what installs on the OEM firming arm, such as the Fin—these supply full pressure all the time, unlike a Keeton or limp-wristed seed tab.

There’s some seed flap technology that you probably do want on your drill, however, and that’s the forward-bend of our Ninja flap— specifically designed to help ‘close the gap’ so seeds don’t escape. See photos below. 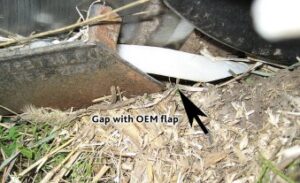 Furthermore, you’d be availing yourself of the exceptional durability of our highly flexible Ninja flaps. They’ve proven to have superb wear-life, and don’t break off like OEM and most of the other aftermarket flaps/tabs that are stiff.

Don’t settle for second-rate. Get the best value and optimum performance with Exapta.