by Matt Hagny
Case studies of some top-notch no-tillers (there are many). 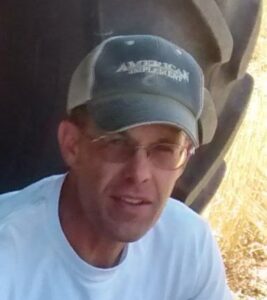 Scott Arthaud
The Oklahoma/Texas Panhandle is an exceptionally harsh environment for growing dryland crops, and despite being plenty dry most of the time, no-till isn’t the no-brainer that you might guess it to be. Indeed, the dryness, lack of cropping options, glyphosate- & dicamba-resistant kochia, and the struggle to maintain enough mulch to prevent blowing in their 60 – 70 mph winds are sufficiently challenging that only a very few have made long-term no-till work. Scott Arthaud is one of them—the only one in his area. Growing only 2 crops in 3 yrs using a wheat >>milo >>summerfallow rotation is routine in their area, but everyone v-blades the fallow at least once—except Scott.
Scott’s dad had tried no-tilling milo into wheat stubble in ’82 or ’83, but they just didn’t have the equipment to make that practice work. When Scott came back to the farm in ’95, no-till seeding technology had advanced enough that they were able to make a habit of planting milo directly into the previous year’s wheat stubble. But they still v-bladed in the fallow year, until 2001 when Scott bought a JD 1850 drill and started no-tilling the wheat as well (into summerfallowed milo stalks).
Scott admits to being stubborn about no-till, but he also harbors doubts about it. He thinks he’s lagging financially behind the best farmers who v-blade, mostly because his herbicide costs are too high now that glyphosate- & dicamba-resistant kochia have blown up. Scott says he definitely spent too much in 2015 & 2016 on herbicides, with much of that learning how to use paraquat and having some control issues. He’s also plenty focused on sanitation—attempting to not let any weeds go to seed. But Scott bought a WEEDit (modern version of a GreenSeeker with much better technology) in early 2017, and is very optimistic. Scott says the WEEDit allows him to cut his herbicide costs in half in summerfallow, which he predicts will put him “on-par or below what it costs to operate a v-blade.” The WEEDit typically applies anywhere from 3% to 20% of what a broadcast application would require, although Scott will likely continue using some soil-applied chems in his summerfallow, and some sprays are still broadcast, so he calculates it’ll end up being a 50% reduction in total herbicide costs for fallow. WEEDit also accommodates the use of stronger herbicide mixes. Plus, he gets to keep all the benefits of being continuous no-till.
As for the benefits of no-till, Scott says, “Yield-wise, I’m not beating my neighbors by any substantial amount if at all.” But he points out that their area had a 3- to 5-inch rain event in May 2016 that caused a lot of erosion in anything that was v-bladed, while his continuous no-till had very little damage from that storm. Scott says their long slopes can create major scouring off of soil if the water starts moving. He also points out that their no-till fields were far more traffickable this last summer than where v-blading in recent years created restrictive layers that kept the soil surface mucky (granted, too wet is quite a rarity for them).
Still, he must be doing something right, since he’s almost quadrupled his cropland in 22 yrs, starting with 4,000 acres of dryland (rain-fed) cropland in the mid-’90s with his dad, to 12,000 acres of dryland plus 3,000 acres of irrigated today. Most of their acres are rented, so there’s not a big pile of equity to keep him afloat.
Just how dry is it? Well, corn isn’t insurable in their area. Scott’s long-term average for wheat on summerfallow is approx 35 bu/a. “Stubble-back” wheat (wheat on wheat) makes 20 – 50% less, depending on how dry it is. The best wheat he’s ever had made 84 bu/a, with a farm average of about 60 that year. Milo makes somewhere between zero and 100 when planted into wheat stubble, but usually 30% less if it’s milo on milo—and the weeds are worse, especially grassy sandbur. In 2011, the milo failed completely—but from Aug 2010 to Aug 2011, he had only 4 inches of precip in total for the entire 12 months! One saving grace is that he’s at 4,000-ft elevation, so his nighttime temps cool off nicely. Some of his soils are deep—mostly clay loams, but a few of his better soils are a touch sandier.  However, plenty of his cropland has caliche layers that limit rooting and yields. 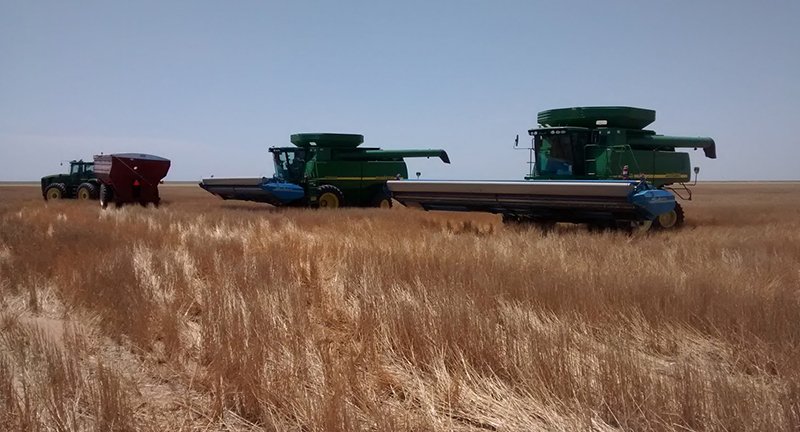 Arthaud really likes his Shelbournes.
Scott’s planter also features Valion seed tube guards to limit blade flex, and he notes that they sure last a lot longer than OEM. His planter finishes the job with Keetons + Mojo Wires for seed firming, and Thompson closing wheels with toe-out wedge. He says he really got along fairly well with Martin Spaders and drag chains, except for the bearing problems they had—and is very pleased that Thompson wheels don’t have any bearing issues.
On Scott’s irrigated acres, some of it is continuous corn using strip-till. And where the wells are very limited, it’s a rotation of wheat (or barley) >>corn >>milo >>sunflower. He’s tried canola a few times, with mixed success.
Scott says, “I sometimes curse the irrigation—all the extra equipment and labor—but it’s our bread and butter. Although I’m tempted at times to just get rid of all the irrigated acres—we spend a lot of time on them.”
Scott has tried dryland corn, but the yields aren’t very competitive with milo, and corn doesn’t produce enough stalks for his liking. Although weed control is more challenging in milo, so he often runs a hooded sprayer on some of his milo acres.
Scott continues to adapt, noting that what he thinks he knows is often the biggest hurdle to overcome: “I should experiment more, rather than thinking I know the answer.” He says he certainly doesn’t feel like a model no-tiller: “It’s much harder than I thought it would be.” Still, he is reasonably confident he’s on the right track, noting that his “fields that’ve been no-till the longest have the best soil condition.” And that he can still see the damage from v-blading 20+ yrs ago on his fields—when dry, that layer is still identifiable, even though roots are growing thru it. Overall, Scott is stoked that WEEDit will allow him to continue his no-till program while greatly improving his bottom line.
For more info on WEEDit, see our newsletter, Tillage vs Technology.