We’re starting something a little different with this newsletter series, aiming to give you some things to think about by providing case studies of some top-notch no-tillers (there are many). 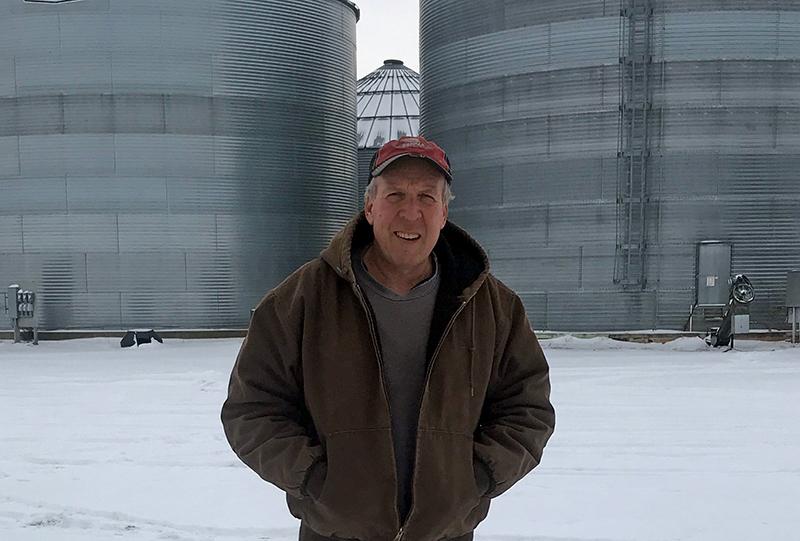 Craig Stehly on their farm in South Dakota

With 25+ years of continuous no-till under their belts, and an operation that has grown 6-fold to 12,000 acre since they began no-tilling, Stehlys are certainly successful by most any measure. Never to rest on their laurels, they continue to experiment and adopt new practices, such as cover crops.

Way back in the ’90s, Stehlys were experimenting with cover crops in the late summer or fall after wheat harvest on fields going to corn the following year, but couldn’t get enough growth on clovers, vetch, etc. Craig says that when they started using brassicas, that’s when the practice finally began to work because they were then getting enough growth on the cover to do some good. They gradually refined the process (which species to plant, and when), and for the past decade it’s been routine for them to do this on all their wheat stubble going to corn. They’ve settled on a 6- or 7-way mix that includes brassicas, oats, flax, turnip, and Ethiopian cabbage. Craig notes that the flax and Ethiopian cabbage will stay upright and be durable enough to provide some snow catch. Including oats and flax also help build mycorrhizae levels, which the brassicas do not.

Due to current grain prices being so lousy for wheat compared to other crops, Stehlys are down to about 15% of their acres in wheat. Usually it’s on closer to 1/3 their acres, but a wet fall (got too late to plant) in 2017 cut their acreage even further. Some acres may go to spring wheat instead (they much prefer winter wheat; they struggle to get the yields from spring wheat).

Stehlys farm a geography that stretches about 25 miles from west to east, and their rotations vary accordingly – Craig notes that every 15 miles going east, he picks up another 0.5” of rain over the long-term, and that corn does enough better and wheat does enough worse that by the eastern end of their operation, they grow only corn and soybeans. Craig says, “Wheat does some things for you in the rotation, but we’re trying to do that with the [cereal] rye as a cover crop ahead of beans [on our eastern fields].” 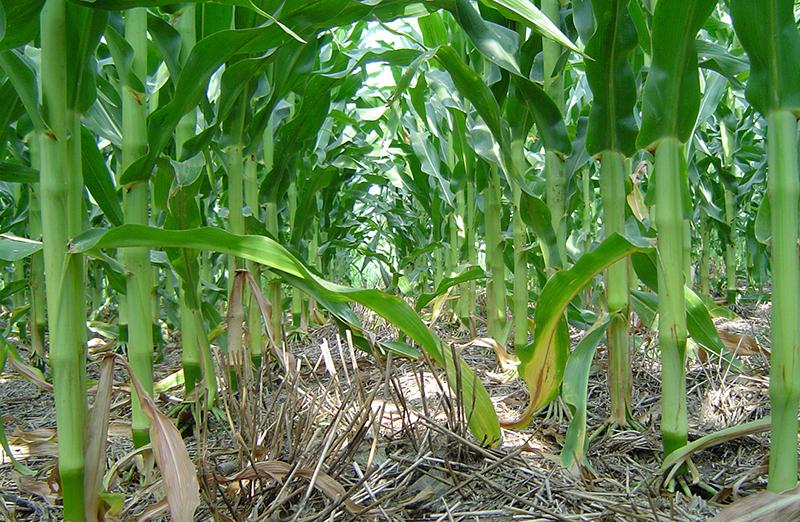 Stehlys’ corn. They’ve been on 22-inch rows for twenty years.

Stehlys have been doing some rye (not ryegrass, mind you) ahead of soybeans for about 3 – 4 yrs now. So far, it’s only been about 10 – 20% of their acres going to soybeans. Craig says they’ve never had any yield drag in soybeans following rye, and they don’t expect to see it. Craig’s biggest problem is getting the rye seeded, since winter arrives not long after they’re done harvesting corn. This fall (2017), they had the rye aerially seeded, which worked out great with some rains afterward to establish it. Craig says, “I really like aerially seeding it if you’ve got the right weather. You’re not beating your stalks up [with the drill].” And they can be more timely getting it established. But Craig notes, “If you don’t have some rain and humidity coming in, you might as well drill it.”

Aside from the challenges of establishing the cereal rye, Craig sees nothing but benefits: “It definitely helps the corn the year after the soybeans because of all the rye residue—we let the rye go till boot stage ’cause we’re trying to suck more moisture out; we usually do rye on fields that stay the wettest or have salinity issues.” Craig also says the rye helps the weed control, and helps get the soybeans planted on time. He likes to plant the soybeans into green rye, but says it also works to have it completely brown (but not as rank, or it will never dry out). Because of all these pluses, Craig would love to have 50% of his soybeans going into rye every year.

Stehlys don’t do any 2d-year corn because of yield drag. Craig explains, “We can get too much residue here, and it sometimes hurts the corn on a cool, wet spring. Sometimes it grows out of it, but if it stays too cold and wet too long, it hurts the yield.”

Stehlys definitely take the long view. Craig says, “You see a lot of short-term thinking around here. Guys rent land for 2 or 3 yrs, bale up everything including soybean straw, and create a bunch of compaction with telehandlers and semis picking up the bales, and then leave the mess for someone else. It takes 10 bu/a off the bean yields for a few years till you get the residue built back up.” He says, “Removing residue is a poor practice over a 10-year period, but it might help your corn crop in certain years that are extremely wet.”

Stehlys don’t get excited much about strip-till or putting any fertilizer on sub-surface, noting that there’s just no opportunity to get it done in the spring with their soggy fields. “We use tracked tractors just to pull the planters!” (This is another reason they don’t run side-band openers on the planters—slows them down too much, and adds too much weight and draft.)

Instead, the vast majority of Stehlys’ fertilizer for corn (and all of it for soybeans) is broadcast as dry product on the soil surface (sometime after the snow melts but before the planters roll); they hire this done. Treated urea, AMS, MESZ on everything, and KCL where needed. Corn also gets pop-up as a liquid (10-34-0 plus zinc) squirted into the furrow thru Valion seed-tube guards. On some fields going to corn, Stehlys will save about 30% of the N to be custom-applied with a spinner spreader after the corn is getting a bit of size. So far, Craig hasn’t found any yield gain from the split application, and he worries about the year that no rain occurs for a long time after he applies that second shot: “If we had a 20 or 30 bu/a yield loss from the crop not getting that N soon enough, it would take an awful lot of years with small gains to make up for it.” But he’s been testing this for 5 years, and notes that if they got wet enough and leached or denitrified some early, the late application might save the day. But so far, he just hasn’t seen any reason to incur the extra cost of splitting it on a large portion of their acres.

Everything Stehlys have is grid-sampled, and they variable-rate both P & K, as well as seed drop. Only about 10 – 20% of their acres get K, which is a change from 30 years ago when their levels were sky-high everywhere. Lots of rain and hauling away big grain crops will do that. Craig notes lots of problems with low Zn, and says the whole area tests low, it’s just a matter of how low.

For wheat, Stehlys put down a healthy dose of MESZ with their drill, an old Deere 1850—which is mostly stock except for Ingersoll blades, and Case-IH SDX seed-lock wheels (Craig explains that the drill is only used for cover crops and wheat, and it’s usually dry enough then that closing the furrow isn’t a big deal; he’s very interested in Exapta’s Aricks row cleaners, however, because he hates waiting till noon to start drilling lest he hairpin terribly). Wheat gets stream-bar N that they do themselves.

Stehlys broadcast MESZ for their beans, since they all go in with their 22-inch planters. No pop-up is used on beans. Their planters are a 48-row DB88 (Deere-Bauer) and a 32-row DB58, with Yetter SharkTooth row cleaners, Exapta’s Valion seed-tube guards, Keetons, and Thompson closing wheels. Soybeans are treated with fungicide only. Craig says, “We don’t use many insecticides unless the soybean aphids or bean leaf beetles get crazy bad. I just hate killing beneficials.”

Craig runs a lot of sulfur, about 15#/a per year, and isn’t sure if it’s enough yet. “That’s a big change from the early years of no-till. We thought we had a lot of problems with nitrogen for corn and wheat back then, but I think most of it was actually sulfur.” Craig takes a lot of tissue samples and runs them thru a lab to learn how he’s doing.

There’s a simple elegance to what Stehlys focus on: not chasing the latest fad, just relying on solid agronomy and taking the long view, and using the right tools to get the job done.

For more of the history of what got Stehlys going on no-till, and their early challenges and mistakes, see the article One Step Ahead (written in ’02) and a follow-up 5 years later: A Few More Steps Forward (Scroll down to Stehly Revisited).