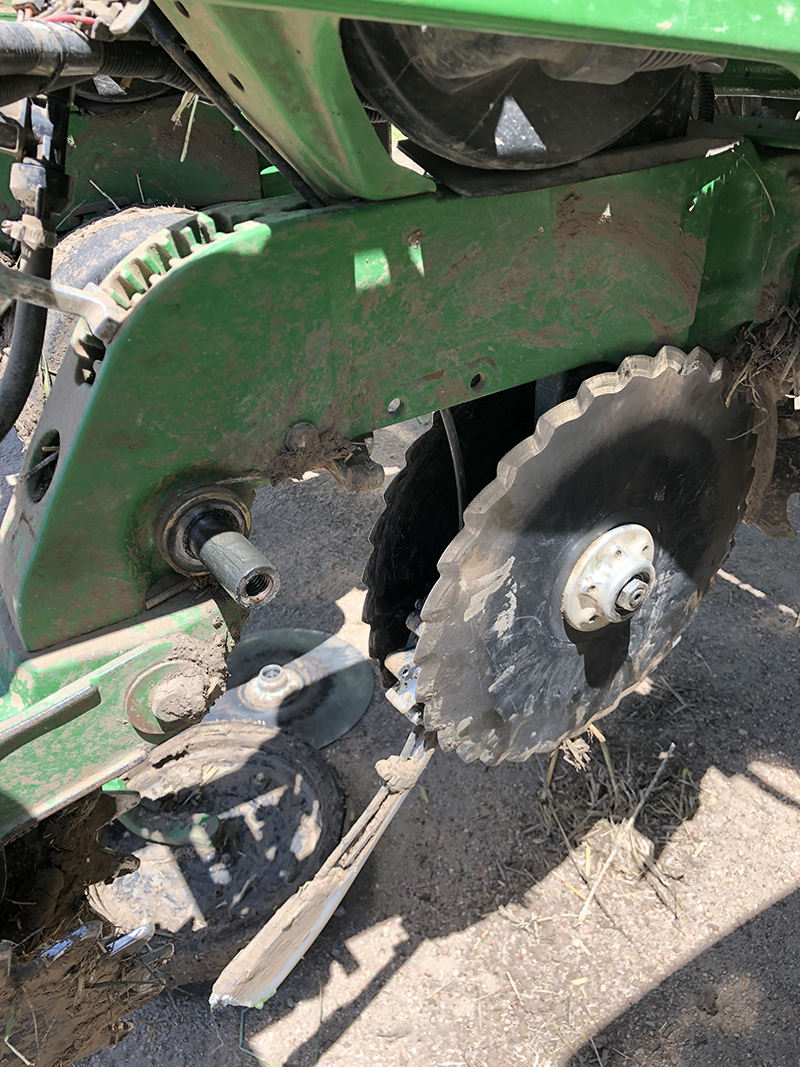 The Exapta crew has gotten quite a few questions from our customers as to Precision Tillage Tech’s STP/Sabre-Tooth opener blades, so we tested them this spring [2019] on a JD 1770 planter with XP row units in central Kansas in 25-year no-till on mellow creek-bottom soil. While I was busy forensically examining the seed placement, the farmer completed the first round, jumped out, and told me that the row with these was requiring way more downforce—sometimes needing more than the 425# limit he had programmed into his AgLeader hydraulic downforce system! The row with STP openers was needing far more than 100# of extra downforce. I was completely taken aback. They seem so sharp, and present a narrower profile for entering the soil, since one blade is 15” and one 14.75” diameter. After a long second, I replied that the STP’s were 4mm thick, versus 3.5mm on the other rows (thicker is more rigid, so they don’t flex as much, thereby making a wider furrow). But that extra thickness seemed hardly enough to explain the very large difference in downforce he was reporting. Later on, I got to thinking that all the extra edges (the teeth) were each cutting their own path thru the soil, and this was probably the larger factor. I ran this by a highly experienced ag engineer, and he agreed. The reason a saw-blade’s serrations are good at cutting is that it’s being powered and it runs perfectly straight. Here, it isn’t. We know that larger diameter blades take more downforce because there’s more edge engaging the soil (this is true even if you run the larger blade at a shallower angle to the direction of travel, so that the width of the furrow is the same). The serrated STP blades have a lot more total edge engaging the soil too (remember, opener blades run at an angle, so all those extra edges are encountering resistance by carving their own path.) 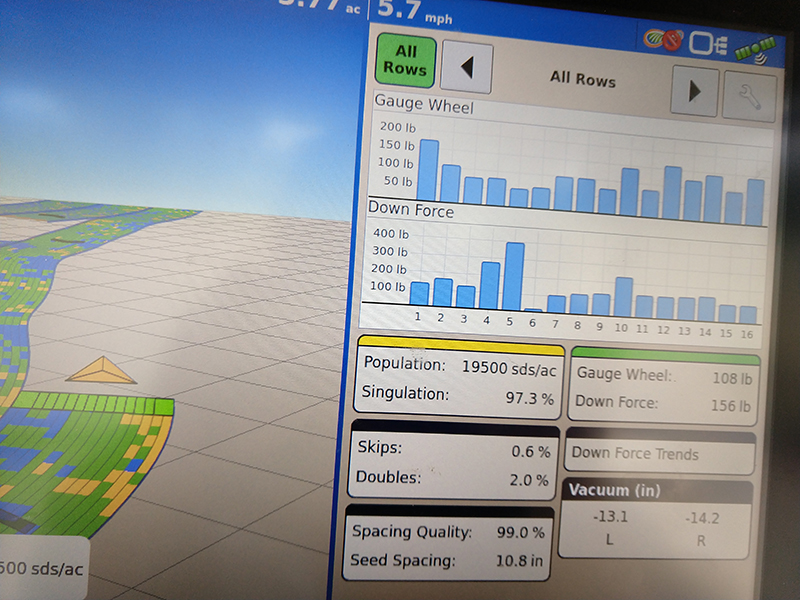 AgLeader readout of downforce requirement per row. This was a typical difference seen between Row #4, brand-new JD blades, and Row #5, STP (saw-tooth) blades (the other rows were worn JD blades, and weren’t going as deep—we kept the same depth settings when we installed these on Rows 4 & 5). Both were shimmed correctly, and guards in similar condition. We moved the STP blades around to different row units, and the effect was always the same—they required about 35% more downforce, on average.
We moved the STP blades to a different row, and planted a different field on a different day. We also shimmed them a bit looser this time, per the instructions. The high downpressure requirement followed the STPs to the new row, and the difference was still very large (as a %, perhaps even a greater difference with the looser shimming). All told, across multiple fields and soil types, the STP blades were requiring an average of 35% more downforce than brand-new JD blades on the adjacent row.
My original concerns when I first saw the STPs advertised were that the furrow would be too irregular at the bottom to get good seed placement and good engagement by the Keetons + Mojos. However, the placement and seed-firming action were just fine, at least in the field that I looked at (so long as the gauge wheels didn’t lose ground contact, that is—where they did lose ground contact, seed placement was terrible). There’s some scalloping of the edges of the furrow, but it’s formed cleanly enough that the seeds were all lined up and engaged by the Keeton. At least in this one observation (might be different if marginally dry at seed depth, or if soil was sandier or looser).
The lifting of the sidewall by the serrated edges of the STPs was also a concern of mine, as they exit the soil. As most of you know, I’m quite opposed to RID (indented) gauge tires on JD/Kinze/White/Great Plains/Harvest Int’l planter openers because allowing the sidewall to lift before the seed comes to rest results in very poor seed placement—the sidewall must remain intact to guide the seed into position. (It’s better to wait and chop the sidewall apart with spoked closing wheels.) Indeed, the poor seed placement from not maintaining (gauge-tire) ground contact is just an exaggeration of what the RID gauge tires do—more sidewall blowout. However, the STP opener blades in this single observation of mine didn’t result in severe sidewall blowout. (This is still a concern I would have in other conditions, and should be monitored closely.)
What do the STPs do better? Presumably they result in less hairpinning, although it wasn’t really an issue in the field where I was observing them, as it was soybean stubble with live cc cereal rye on it.
So, while my initial concerns of the STPs (irregular seed placement; premature sidewall lifting) were not borne out in this observation, we discovered something else: if you’re going to run STP blades, you need to have plenty of extra downforce available for NT (35 – 60% more). For many regions and planter (or drill) setups, that is indeed a problem. Especially when it turns off dry. (Even when wet, it’s really common even in mellow soils of the Dakotas in 25-yr NT for some areas—and not just headlands—to have downforce requirements exceeding 350 – 400 lbs while running standard OEM 3.5mm blades and nothing else robbing downforce from the row unit. You learn this when you equip a planter with row-by-row hydraulic downforce.)