Seeds Must Absorb Moisture (Help Them)

I’ve spent my working life as an agronomist (independent crop consultant), trying to improve no-till cropping systems and methods. I didn’t set out to manufacture or sell planting equipment—I arrived here out of necessity, in that one of the weak links in our no-till systems was the ability to get consistent stands.

As far as I’m concerned, the best thing to ever happen to planters for no-till was the Keeton along with the Mojo Wire to make the Keeton do what it should. And I’m not biased by monetary gain in this statement, since I arrived at those conclusions well before I sold either of those items (the precursor to the Mojo Wire was developed by Phil Kester of RK Products, and later given to Exapta since he didn’t have time to pursue the project).

For my consulting clients, the results from adding the Mojo to the Keeton were quite stark: Their stands became so good, and consistently good, that we had to pare back the seed drop significantly. Previously, they had been dropping several thousand extra corn kernels to get close to what they needed for a final population. After the Mojo precursors were added to the Keeton, we were consistently getting 90-95% stand establishment. This is because the seeds were thoroughly, unmistakably embedded in the moist furrow bottom. Not only did the percent of stand establishment improve markedly, the timing of emergence was much more uniform since all the seeds had enough moisture to germinate and grow at the same rate. I.e., we had far fewer late and/or wimpy plants.

I realize that not everyone’s soils and climate are as unforgiving as they are in central Kansas and southward, yet independent studies in the cream-puff conditions of southern Illinois still show a 6.4% increase in ear count from adding the Mojos. This is on top of the increased ear count from the Keetons by themselves.

I hear a lot of griping about Keetons dragging seed. Personally, I’ve never observed this in low-disturbance continuous no-till. And I’m not even sure how it could happen in those conditions. With a Mojo Wire, the lower part of the Keeton is continuously scouring itself clean against the furrow sidewalls. (Now, if you’re running a coulter ahead of the opener, all bets are off.) And keep in mind that uniform timing of emergence is vastly more important for yield than uniform spacing*.

I also hear a lot of complaints about other aspects. For instance, you can’t let the planter roll backwards, nor back up in tall weeds or grass, without damaging the Keetons. True, but this can be managed. The advantages of Keetons are so overwhelming that these minor grievances should be forgotten. Some people who are applying liquids thru the dual-tube Universal Keetons had issues with the tubes coming apart inside the tail-but starting in 2016, the new Quick Attach Keeton eliminates the problems with tubes coming apart inside the tail, as well as a slew of other weaknesses in the Universal brackets.

New for 2019 are the ‘non-stick’ Keetons, made from black material that reportedly sheds mud far better than the white nylon that Keeton tails have long been made of. These have their own bracket, and the tail is supposed to detach from it if the operator backs up with the planter still in the ground (Smart Firmers use this too). The pressure on the non-stick Keetons is about 75% of what is achieved with a QA Keeton + Mojo. (Perhaps because of the noise Exapta has made over the years, most new iterations of Keetons apply more pressure than the version they replace—a good thing!)

Non-stick Keeton tails ($55) are also available (in late April) for use with QA brackets. Essentially this is beta-testing for both products.

I know of several seed company agronomists that have observations similar to my own. As one veteran Pioneer agronomist says, he’d rather go without a seed tube than to go without a Keeton. 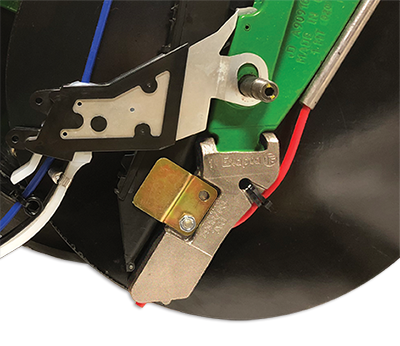 Mojo Wire installed on planter Flo-Rite for Universal & Scraper-Mount Brackets. Flo-Rites don’t have any more pressure than Keetons, so they need a Mojo Wire too.

And for the zillionth time, a Rebounder isn’t a substitute for a Keeton! Rebounders don’t do any significant seed firming—they apply very little pressure to the seed as they pass across. About the only thing those two products have in common is that they’re both made of plastic, and both can be used to apply fertilizer or other liquids in the furrow!

With anything you add to a piece of equipment, there will be some sort of drawback, increased maintenance, limitation, or things to do or not do. But if the gains outweigh the negatives, it is a good investment. Keetons & Mojos are certainly in that category for no-till, and provide net benefits in many other conditions as well.

For more information, see our past newsletter: Seed Firming: Why, Where, and How

*While everyone is hung-up about having perfect ‘picket-fence’ plant spacing, it’s really not all that important in terms of yield. Of much greater importance for corn yield (or cotton or sunflowers) is uniform timing of emergence, which is largely a result of uniform placement of seeds in the soil-uniform depth, uniform amount of seed-to-soil contact, uniform fill over the seed, etc. There’s been a lot of research done comparing spacing vs emergence timing for yield effect, and much of that research is compiled here. Some of those researchers have commented on the summation of that evidence more recently:
Emerson Nafziger, Univ. Illinois Extension, states: “Within reason, plant spacing uniformity within the row has little effect on yield if plant population is adequate for high yields. While plant spacing uniformity generally has little effect on yield, the same cannot be said about plant size uniformity…. When a plant emerges more than a few days later than its neighbors, or is injured while its neighbors are not, chances are that it will never regain its competitiveness with its neighbors, and as a result it will usually yield less than other plants….[T]he plants next to a late-emerging or injured plant…do not make enough extra yield to make up for the loss of yield by the plant that falls behind.” [Emphasis added] (Chapter 2, Illinois Agronomy Handbook, p 22)
In April 2009, Nafziger also wrote an article summarizing the research: “Uniformity of plant spacing in the row takes on less meaning as populations increase, and it is nearly meaningless at plant populations in common use today [in the Corn Belt & under irrigation] with average plant spacing often about 6 inches or even less.” (in Univ. Illinois’ The Bulletin newsletter, ‘Are Your Corn Stands “Precise” Enough?’)
Joe Lauer, Univ. Wisconsin Extension corn agronomist, has reached similar conclusions, noting that most Corn Belt studies have found no yield advantage to precise plant spacing at today’s 30,000+ corn plant populations. (Corn & Soybean Digest, 2010)
Jeff Coulter, Univ. Minnesota Extension Agronomist, has also conducted four years of research on the topic, finding that within-row plant spacing affected yield only 1 – 2%, while uniform timing of emergence & early growth accounted for 5 – 9% of yield.
Christopher Boomsma & Tony Vyn, Purdue, have conducted some highly interesting research on plant-to-plant uniformity being more of a challenge in no-till, at least with the planter setup they were running. Plant-to-Plant Uniformity is Essential for Optimum Yield in No-Till Continuous Corn