See for yourself: Valion versus OEM Seed Tube Guards

Our customer in Eastern Nebraska shared side-by-side comparisons of Valions and OEM guards on a John Deere XP 24-row and a Kinze 3000-series 16 row. The differences in wear are undeniable. 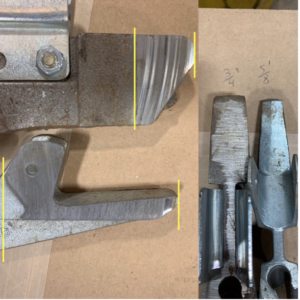 Note: Guards are completely shot at 5/8” and should be replaced often enough so that they never get to this point. The Valion can run at least another 2000 if not 4000 acres, whereas the OEM guard didn’t even make it for one season!

2) Blade surface contact on the Valions is at the most critical point which is at the very bottom.

3) Blade surface contact on the OEM guard is far greater than the Valion, creating a pinched seed trench which causes erratic seed depth and loss of seed-to-soil contact. (It is much harder for seed firmers to push seeds to the very bottom when seed trenches are pinched.)

Note: Most likely the seed tubes are also being worn or chipped with this much wear on the OEM guards, which is another expense for next year’s repairs (not to mention erratic seed placement directly effecting yield loss). 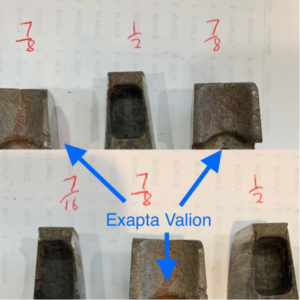 The Kinze guards are past the point of being completely worn out, which again should be replaced often enough so that they never get to 5/8”.